well I had seen photos of these cakes from LLama friends but I had not seen one up close until I saw one in Tescos. What an interesting debate that started by my dear hubby. 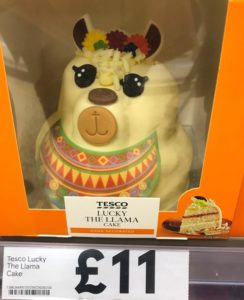 A couple looking at this cake saying how cute it was and hubby pipes up “its not a LLama its an Alpaca” – well that raised the obvious and often repeated questions as to what the differences are between LLama and Alpaca as they are of course, both from the Camelid family.