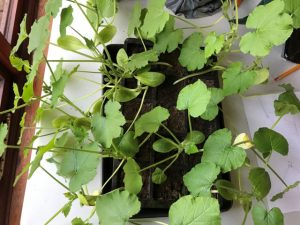 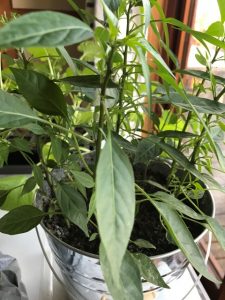 but it the sun did come out and was beautiful 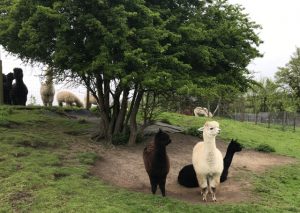 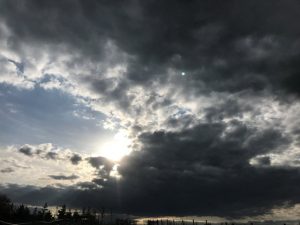 no seriously, a Guard Gun dog is the best thing you can ever have on a Farm. All vermin can be controlled and that includes Black Panthers, Foxes and any other kind you can think of – literally.

Thank you to my friends who have asked about the “hero” – farming life just continues as usual but the updated photos show that she won the battle and came out only with her Heros scars.

My Veterinary skills came in mighty handy to avoid eye infections or loss of sight.

Protecting her livestock and home: 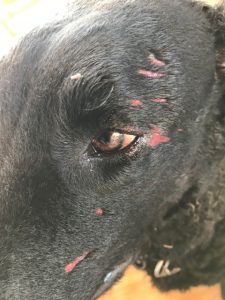 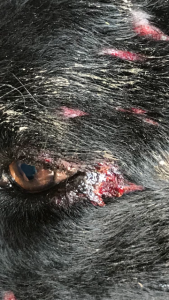 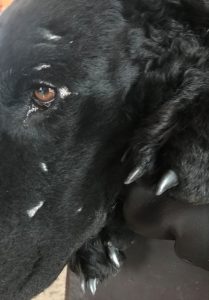 wow – what a storm we had at Clay Meadow, here in Cirencester. Totally unforecast, totally wild, with thunder, lightening and pounding rain in stair rods from a thick black sky.

I was sent this from a Facebook record so apologies as I do not know who took it but wow – Cirencester Church in that storm rocked! 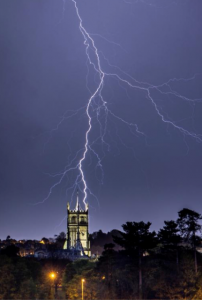 ours were quite boring by comparison 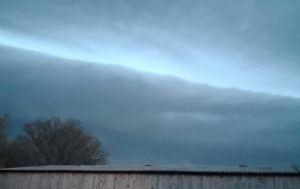 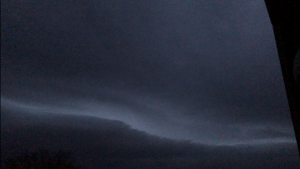 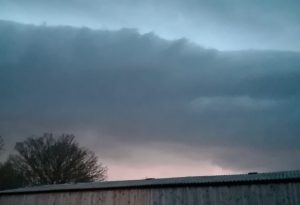 Lets hear it for the Boys – Kensmyth Clay Meadow

Well – Lambivac is one of the Husbandry jabs that Alpaca need and the annual one comes round really quickly whilst the cria need their first course starting off and mothers need theirs for passive transfer – lots of fresh needles of various sizes for all.

I was particularly impressed by one of our homebred stud males fleeces again recently – not bad at all for a homebred boy of nearly 9 years old!

the two hands and one hands not so easy to demonstrate! 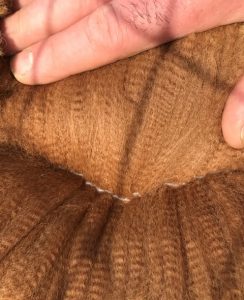 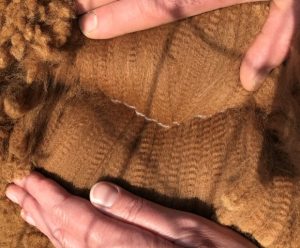 Dandelion and Burdock for the Bees at Kensmyth, Clay Meadow

no really – do you not remember the old fizz of Dandelion and Burdock that Granny gave you? You can still get it in the shops. 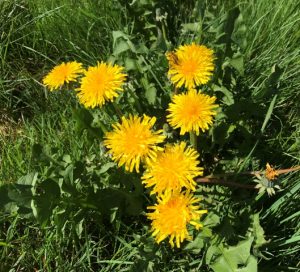 well the weather has certainly changed – even I noticed… no really have been watching like a Hawk in order to get the machines onto the ground. Later our roly poly rare breed mares will be pulling the Harrows but this year I drew the last straw and got the Hot Seat… all day in an ATV when others were sunning themselves and…

as others lay in the shade and watched me… 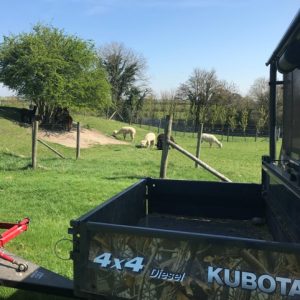 I wouldn’t mind but the herd thought it so amusing they all came to watch – nearly shearing time Bless! 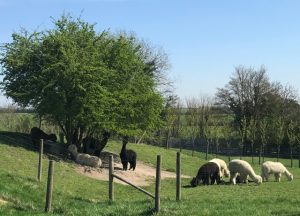 Wonky Carrots take of and exploited?

I thought the idea of wonky veg sales was to benefit the Farmer as all could be sold?

seems to be that in the supermarkets it is being exploited as the trendy veg to buy!

my version of a wonky carrot on my farm is just that!

the Sunshine has appeared at last – with promises of more… 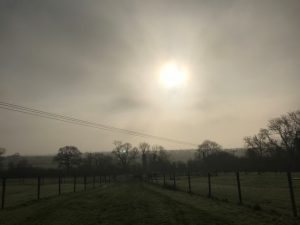 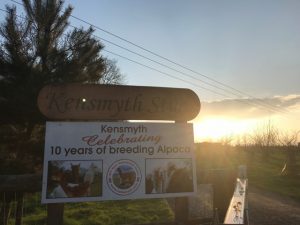 Triffid growth in the rain as it continues into April Showers

For horse owners it brings laminitis, for Alpaca owners, wet fleece on legs and the need to dry fleeces out after shearing – but the rain outside 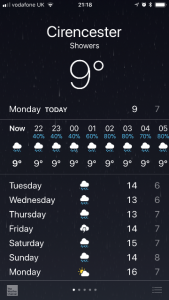 makes the indoor Triffids grow more if nothing else 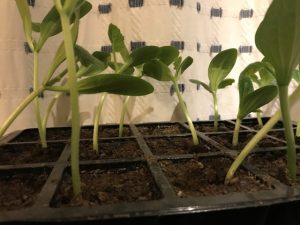 and the dogs still want to play… 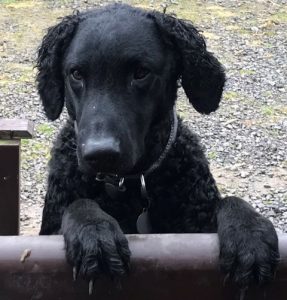 Alpaca Castration 2018 The Pros and The Cons, Kensmyth, Clay Meadow

Alpaca Castration – well any castration is an emotive subject. It conjures up the wrong kind of images and many folk simply do not want to discuss it.

Alpaca Castration is the subject of many Social Media discussions and it is a matter of personal opinion so here goes:

Alpaca males can be castrated (my opinion) when they are 18 (eighteen) months and older. I do not believe they should be castrated earlier than this because they are simply not mature enough. In 11 years of breeding we have only ever had about 6 males castrated – all for different reasons and all different ages but here goes:

It is a known fact that Alpaca can get Rickets if not given the appropriate ADE vitamins through months of low daylight/sunlight hours owing to where they come from originally being so much hotter than the UK. To this end, Alpaca do mature slowly both physically and mentally.

Simply having two testicles present is not indicative that an Alpaca can be castrated.

Alpaca castrated very young often suffer with health and bone issues later in life – no reason to do it? Then don’t!

one testicle present is obviously of concern and that Alpaca should never be bred from.

Weaning at six (6) months (or 7-8 months) when not grown to a weight to be able to take the inevitable drop in weight due to the stress and vulnerability at weaning – is NOT the time to castrate.

Irrespective of all of the above – unless you are VERY experienced – if the Alpaca to be castrated is being done due to a high volume of males only and has great genetics – are you absolutely certain that second fleece next year is going to not make him the sire of all sires? Too late when you have taken them off because you cannot put them back!

It is true that the majority of Alpaca males are castrated because they are not good enough to be Sires and this is something I fully support – far too many sub standard males are bred from producing inferior fleeces which ultimately reflects badly on the Fleece industry established.

What age to castrate?

NOT before eighteen months unless a medical emergency – my opinion.

When it is cool so there are less flies around potentially causing infection and hopefully not too much wet or mud to get into the wounds. Summer is not a good time to castrate. Winter is best.

When NOT to castrate?

When you are trying to make an Alpaca change its ways by castrating it.

If the Alpaca male has been used as a Stud Male and you suddenly want him to become a Pet Boy perhaps because you want to not part with him and use another stud male or he has become unhandleable or a host of other reasons – castrating him is unlikely to change that.

How long after castration can an Alpaca male go in with girls?

Depending on the age of castration and if he has ever been used for mating (my opinion) is not the same season – wait at least six months.

Why Castrate in the first place?

Castration is often used to enable the male Alpaca castrates/wethers/(known as geldings in the horse world) to live with either females (so prevents mating) or other stud males or to be used as Pets or Walking Alpaca.

IF you have no females near and that includes Ewes (seen as short necked Alpaca to the Stud Male), then male Alpaca will live happily together uncastrated.

A caveat to this idea of all males living together happily is very simply – NOT all different ages, not from different Alpaca farms and often NOT of different colours.

Alpaca Sheep Flock Guards must be castrated or they will mount the sheep.

Alpaca pet boys kept adjacent to Ewes may jump the fences – so be aware of fence heights.

How to castrate -is there a choice?

Yes – there is always a choice. Some Alpaca owners prefer to use the less expensive method of having a “cut standing” castration which is done similar to that of a horse. Some say it is chosen not through price but also through the remote risk of putting the Alpaca to sleep.

So you have two choices – cut standing or under anaesthetic.

If your Alpaca are healthy and you know their weights, I would personally prefer to have them anaesthetized for castration. That way the job is done with no risk to the Vet, handler or that the anaesthetic used in the cut standing method wears off and the Vet gets kicked in the face.

Any operation carries a risk, infection is likely if the timing or conditions are not right as addressed above.

Remember – no reason to castrate? Then don’t.