wow – this is just a quickie as the nursery of premmie cria is filling rather rapidly.

We had two born last monday and two more premmies yesterday – one at 310 days.

Again Emily was on hand to assist through it all, we nearly lost the mother to a long drawn out birth in the heat but I managed to save both for the time being.

not out of the woods by a long chalk on the smallest born monday and time will tell on yesterdays… but fingers crossed and this one who is simply gorgeous!

this is the first cria born to Kensmyth Bequest who is sired by EPC Cambridge Navigator, who sold for some mere £75,000.00.

This is a strong healthy boy with a fleece that is out of this world. Destined for a superb stud male.

“Navigator was the undefeated supreme champion of the UK 2009 show season winning Nationals,Royal Bath and West and the biggest show that year the SWAG show.

Navigators sire is EP Cambridge Spartacus, one of our most decorated Australian stud sires who’s progeny have dominated at shows through out the world including a number of National Australian Champions.” Cathy Lloyd, EPC

the others are doing well but for those who understand Alpaca premmies, there’s bottle feeding, coating, uncoating, weather watching, milking the mother and a whole host of baby care additional tasks in just keeping them alive.

the changing climate seems to be bringing more and more premature cria and dysmature cria as the months pass.

or the numerous other influences of climate change.

i have yet to speak to a single Alpaca stud who has not had a premature cria so far this year, if not several.

fingers crossed for them all

well I seem to be averaging 5-10 days between blogs due to being so frenetically busy!

The boys have finished GCSE’s now – phew – so just the interminable wait for the results in August.

It always seems nearly as bad as waiting on a cria.

we have been delighted with our results so far in two girls and two boys.

The two girls born some weeks ago now and doing well, the two boys both premature (very) and born yesterday.

the hot weather, despite field shelters, shade and water, takes its toll very quickly on newborns/young cria and with temperatures soaring to 30 degrees yesterday, we brought the mothers with cria into the barns to ensure no “baked babies.”

to help matters later, we had a downpour too.

yesterday we had a lovely girl from the village called Emily come to be introduced to Alpaca Farming and to help with the fleeces.

She had an absolute babtism of fire as we nearly lost one of the cria born yesterday and she was an absolute star. Well done Emily!

photos to follow once we are sure the cria are out of the woods but as for fleeces from our Stud boys – looking fab so far.

Happy Fathers Day to one and all.

well its the longest time I have not blogged for but boy have we been busy.

There is no point talking endlessly about Alpaca husbandry or waiting on late births because thats day to day !

So how about visitors to the farm falling in love with the Alpaca?

or a reminder that cria need water too…

or an American day for visitors where the whackiest was eaten…

or best of all…

Wow – that is a long gap between blogs

We have been sooo busy with the weather throwing everything at us.

It is hammering it down as we speak and lucky we have Field Shelters in every field with hedges growing as quickly as they can!

Mucking out the field shelters and barns, topping fields, looking after machinery, sanding down and repainting on this topper!

Cria weighing, worming, you name it!

The little late cria has now been named… We usually have a “theme” each year for names, last year being the “Eighties” which included “Lickety Split, Hot Gossip, Talk of the Town, Tonka Toy ­ you name it!

This year again we have a theme The luxury highly calorific cream pudding if you have not heard of it. Perfect and growing like mad, reaching 11kg within a week.

Meantime, what else have we done?

Oh, I managed a day off with hubby and sons in control and zoomed to see some friends in Cornwall; several weeks ago now.

Being that far down, it was a delight to shoot in to see Gary and Felicia at Popham.

Just in time to see one of their Appaloosa Alpacas being shorn. So cute.

Oh and the ducklings all hatched – least said soonest mended. 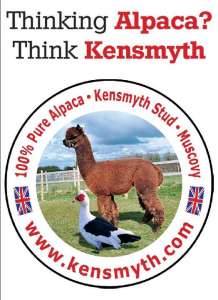